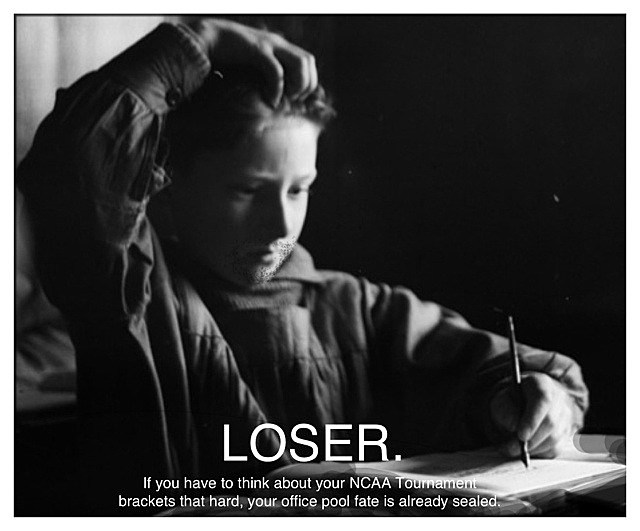 Bracketology [brak-eh-TAH'-lo-jee] noun
1. A term invented by some ESPN marketing wonk implying that there is actual science behind picking which schools will be selected to play in the NCAA Tournament; made to stick because ESPN owns the TV rights to the entire world except for, ironically, the NCAA men's basketball tournament, and don't you just know they're pissed about that.

Give credit to ESPN, they come up with some good stuff. The term certainly gives extra juice to NCAA Tournament analyst Joe "The Great" Lunardi, who is in the midst of his month-long string of appearances as ESPN's chief "Bracketologist" before he's returned to the vault in Bristol, CT, where he is forced to count the network's billions for the other 11 months of the year.

You never hear from this guy any other time, do you? Not even when ESPN goes to Disneyworld. Skip Bayless goes to Disneyworld to spin useless controversies into SportsCenter stories, but not Joe Lunardi, who allegedly uses some hard math to make his picks. Which, incidentally, speaks volumes about ESPN.

So, who replaces The Great Lunardi in the vault when they let him out to amaze us all with his powers of precognition? Well, that's easy. Ron Jaworski. Sure, Jaws talked about ESPN giving him "a lot of money" when forcing him off of Monday Night Football. But you didn't actually think it was HIS money, did you?

As for Lunardi, is it me, or does the word "Bracketologist" make you a little uncomfortable? Like a few other -ologists.

Sure, those guys are legit doctors and scientists, but every one of them does something that involves burrowing into an orifice.

So, no need for a bracketologist here, thank you, Mr. Lunardi. My brackets are just fine. If I'm forced to turn my head and cough, it should only be due to the cloud of eraser dust when I realize I just penciled Murray State into the championship game. They could make some noise, but I'm getting a little carried away and you're making me nervous.

Take the rubber glove OFF, Lunardi! Your fingers are NOT going to be the Last Four In!

Seriously, even President Obama makes a production out of prediction in his annual ESPN "Barack-atology" segment.

Being a big hoops guy, you'd expect some savvy predictions coming from our President, but Obama almost always goes for 1 or 2 seeds. And ESPN college hoops reporter Andy Katz, clearly in the throes of passion brought on by his annual brush up against the ultimate in fame and power, is too distracted by his own eyes crossing to call him on it.

Gee, way to go out on a limb, Mr. President. You can give the order to send Seal Team 6 into Pakistan but you can't pull the trigger on a 12-seed upset, even though we always seem to get one or two every tournament?

Heaven help your brother-in-law, Craig Robinson, if he ever gets Oregon State to the dance. Chances are, the Beavs would have a dougle-digit seed, which means you'd smoke the First Lady's brother from your brackets faster than you would an al Qaeda leader with a bulls-eye on his turban.

Honestly, I can't quite figure why we make such a big production out of our brackets.

Don't get me wrong -- I've taken my fair share of dips in the office pool, and will again this year. Once or twice I've emerged victorious. Usually, I'm just all wet.

But all the on-air and online hype and angst about bracketsBRACKETSBRACKETS is too much. That's because, bracketologists, we all know who wins most of these things, anyway, right?

The secretary who made her picks based strictly on school colors.

The Great Lunardi. Pssh! Put those math skills to use and count your blessings, Joe. You're lucky they let you out for as long as they do.