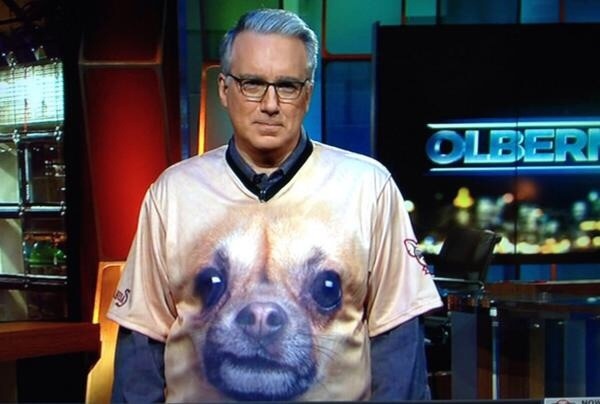 Last night on Keith Olbermann's show on ESPN, KO donned the El Paso Chihuahuas jersey (#33) that was the talk of social media several weeks ago and the jersey the Chihuahuas will wear this Sunday, August 4 for "Bark In The Park" at Southwest University Park.

Not only did he wear the jersey, KO said he would donate money to the Humane Society. The jerseys will be auctioned off after the game with all proceeds going to the El Paso Humane Society. What a great way to kick off the fundraising effort.

When the news broke on Twitter that that Olbermann had worn the now iconic jersey on his show it was around 9:30pm and I saw that Chihuahuas GM Brad Taylor was up and on Twitter. So I asked Steve Kaplowitz to text Taylor for a quote about KO wearing the jersey and the donation.

"What a great national highlight for El Paso. For Keith Olbermann to do a piece on this, to embrace and share in the fun we are having, and to then offer a donation to the Humane Society shows the reach and impact the Chihuahuas are having locally and nationally" - Brad Taylor, GM El Paso Chihuahuas

I know that there are a lot of people out there that don't like Olbermann but I have always been a huge fan of his. Because he is making the donation to the Humane Society, which is a place that is near to my families heart, it shows a different side of KO that I think everyone can not only appreciate but respect.